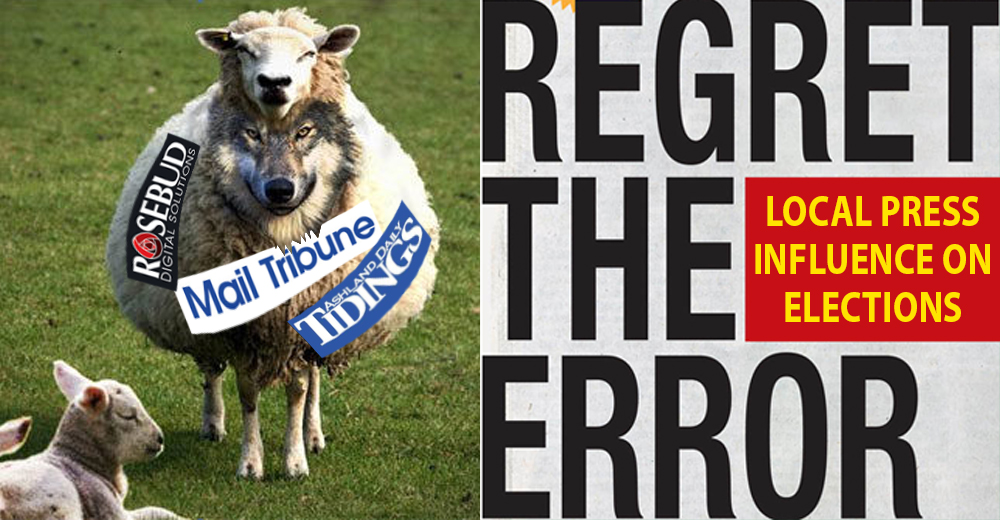 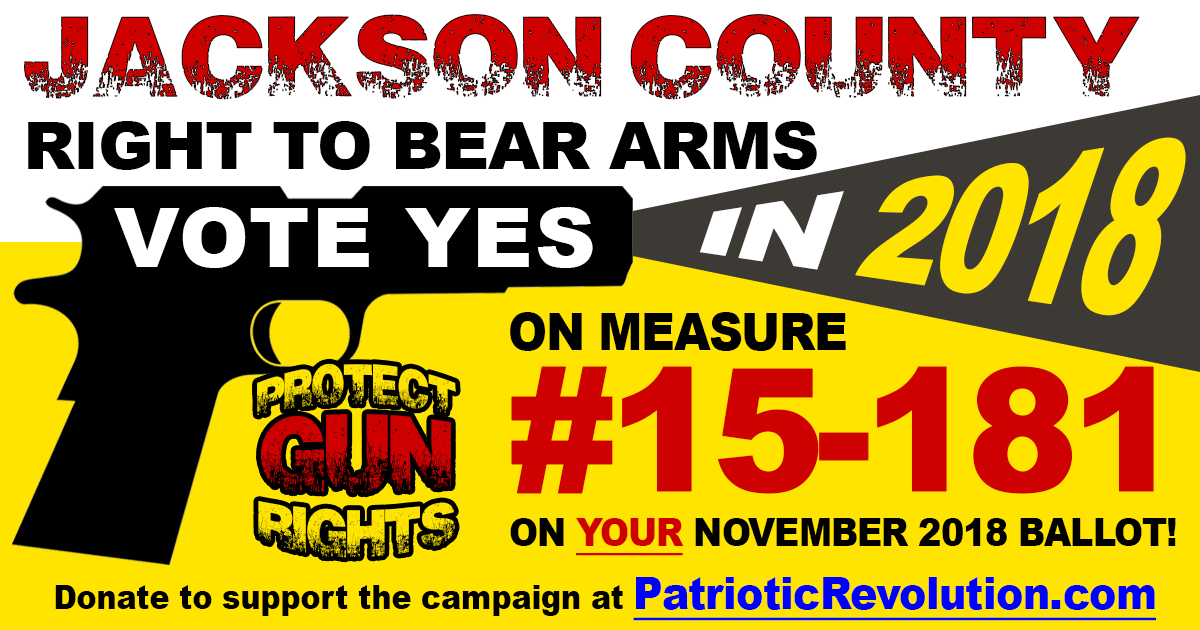 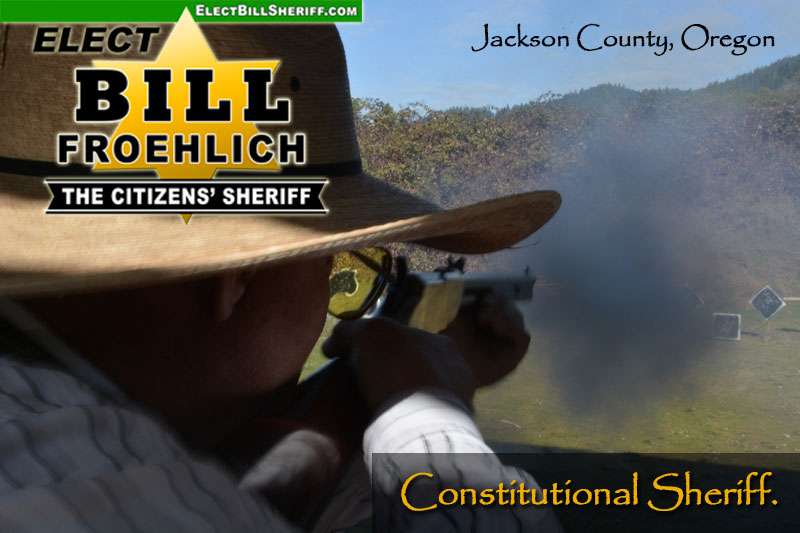 by Ryan Mallory, Scanner Group, Volunteer Campaign Mgr for Bill Froehlich and Measure 15-181 Right to Bear Arms (and YES, I absolutely do volunteer my time to contribute to my community and participate in the public process as a concerned Citizen – Actio Enim Amor Patriae)

Over the last 26 years of living in Jackson County, I have subscribed to and read both the Medford Mail Tribune and Ashland Daily Tidings.  They have been a good source of information about events.  Even in the last 10 years, as digital media has absolutely CRUSHED hard copy newspapers and magazines throughout the nation, I still always read the Trib or the Tidings for different subjects.  Even when those publications were slow in the early days to catch up to the online information revolution, I found interest in the longer form media.  I enjoy TV news and I enjoy Internet news, but newspapers add value in their ability to publish more data on stories.  Personally, I love data.  But there has always been an ELEPHANT IN THE ROOM:  Are the local papers politically biased?  It would seem that they have an anti-gun agenda and that there are points of question in what they projected about the 2018 Jackson County Sheriffs Campaign.

What questions should one ask about this and other editorials from the Mail Tribune about elections?  Here are a few that have come out recently in discussions about this subject:

How accurate is the Mail Tribune’s 2018 editorial portrayal of challenger Bill Froehlich in their endorsement of Nathan Sickler for Sheriff?

Upon examination of the mail tribune editorial approved by the paper’s editorial board with several friends and Bill Froehlich, several inaccuracies surfaced.  Many could have been verified researching existing published materials.  Why those inaccuracies exist are anybody’s guess, but it is always good to understand the source of any inflammatory press. It appears at times that they are stumbling because they are so adamant in favoring their “Golden Boy” they lose touch with reality.  Here are the inaccuracies observed, coupled with the actual information about and from Bill Froehlich as backing information:

MAIL TRIBUNE INACCURACY:   “Froehlich said the county should purchase up to three prefabricated steel pods, each holding 120 inmates, place them in the jail’s parking lot and transfer prisoners in and out of the jail for meals.”

REALITY:  Three units (consisting of multiple pods) would fit in the parking lot, which was closed for construction for months without issue. Depending on what was decided upon, up to three units will fit in that area. Meals are served in a dining area within the new structures.  The inmates are not moved out to eat, the meals are moved in.  This was all available in Bill Froehlich’s published jail plan, and also that they are reusable structures that offer fast relief for the public by ending the revolving door for an additional layer of the thousands of warranted worst offenders.  The Mail Tribune’s editorial board misrepresented the published information.  The difference in expectations is waiting 5-7 years for relief or purchasing some jail beds now, to be used as additional beds when and if the Citizens decide to afford a new jail.  Faster relief and results or hope and speculation.  Yes, a jail plan needs to exist.  The Editorial Board may have been wise to ask Sheriff Sickler why actual planning started in an election month as opposed to in the last two years of appointment.

MAIL TRIBUNE INACCURACY:   “Froehlich is a fairly recent arrival in Jackson County offering a quick fix to a frustrating problem at considerable expense.”

REALITY:  Is going on 9 years “fairly recent?”  New to me.  Does this community want the most educated and experienced candidates that live here within it’s grasp or is there some time frame expected before one can serve their community?  I personally have been in Southern Oregon for 26 years.  Sickler came here from Washington.  There are plenty of people in local government that moved here.  Do I still get to volunteer for non-profits I have been serving for years?  Maybe the Mail Tribute Editorial Board could DEFINE LENGTH OF TIME THAT MAKES A LOCAL RESIDENT READY FOR SERVICE?… especially when one has 3 college degrees and 30 years of Law Enforcement Experience like Bill and willing to serve.  Please let readers know your length of time in the community and stand on semi-automatic gun ownership and the 2nd Amendment.  I have no idea, but Bill is transparent as am I about length of time in Jackson County, gun ownership and more.  Is everyone?  Is the Mail Tribune Editorial Board?

Reference:  Froehlich’s local residency is accepted and noted throughout his application, public speaking and publications at over 8 years.

MAIL TRIBUNE INACCURACY:   “Froehlich was not among the top three finalists” (of the Sheriff appointment candidates)

REALITY:  The order described was THE MAIL TRIBUNE’S published order they wanted to report applicants, not a published standing from the commissioners.  As to the final standing, the Commissioners chose someone that could fill out the last two years of Corey Falls’ term after he vanished from the Southern Oregon Community that elected him.  The controversy was published by the Mail Tribune.  Most folks are not happy about that and find it odd that Corey Falls, who abandoned us, has endorsed Sickler, an endorsement Sickler accepted. Yet, he wasn’t good enough to be Fall’s undersheriff, but all of a sudden is good enough to be sheriff?  I personally will vote for someone that has no political favors owed and cares more about performance than a good-ole’-boy system of promotion.

MAIL TRIBUNE INACCURACY:  “Froehlich has been an active member of the Rogue Valley Scanner group on Facebook.”

REALITY:  Bill Froehlich was not and is not an active member of Scanner Group.  He is a member so that he can read comments on his articles and also to read comments on campaign posts on occasion, but has never really commented.  He was asked to write a series of five (5) articles as a special interest column for Scanner Group from October 2017 to January 2018.  Scanner Group has interests in having guest articles and has entertained that notion, no differently than the Mail Tribune would.  The subjects were focused on Citizens interacting effectively with Law Enforcement under the title “Bill on Justice & Law Enforcement.”  At the point Bill decided to run for Sheriff, that agreement had already ended. Bill Froehlich is no more an active member of the group than Nate Sickler.  Nate just watches through friends and profiles that are not his.  If they both communicated to the 50,000 Jackson County residents and interested parties in Scanner Group, would that really be a bad thing Mail Tribune?

MAIL TRIBUNE INACCURACY:   “Sickler says voters should decide, but argues passage of the measure would “ACCOMPLISH NOTHING”because a county ordinance cannot supersede state law, and the sheriff shouldn’t be in a position of ruling on the constitutionality of gun laws.”

REALITY:  Sickler’s fans openly claimed on Scanner Group that Nate was supportive of constitutional rights and that he “signed the petition for 15-181.”  That was verified by private message by a friend of his campaign, but not further vetted.  Maybe a signature check in the petitions should be done, but really, it would seem that this county has more pressing issues.  In reality, I would not expect a sitting Sheriff to sign a petition relative to enforcement.  Bill is not Sheriff, but instead, a private Citizen now running for Sheriff.  He came out to some events of political parties and initiative booths to meet the public.  The Sheriffs of counties in the U.S. swear to uphold the United States Constitution.  Our individual rights to support ballot initiatives is still a right.  Bill was COMPLETELY CLEAR and supportive of gun owners in relationship to the Constitutional Right to Bear Arms.  Sheriff Sickler WAS LESS CLEAR until recently, when he “ABANDONED”the 8148 gun owners that signed the petition.  As to whether the Charter Amendment supersedes State Law, It doesn’t.  No claim was made that it did.  The Sheriff and County Commissioners are the highest local office that the Citizens can have simple communication with. They are also offices that the local voters choose without forces outside of the local population effecting the outcome.  Those offices will abide by the county charter.  The State will provide whatever enforcement it likes for future gun legislation.

DID YOU KNOW 30 COUNTIES IN OREGON HAVE SIMILAR GUN INITIATIVES OR EXISTING LAWS, Including Josephine, Klamath and Coos Counties???
Reference:  30 Counties with 2nd Amendment ordinances, charter amendments and protection orders in Oregon https://www.oregonfirearms.org/counties-pro-gun-ordinances-proclamations-resolutions-letters/ 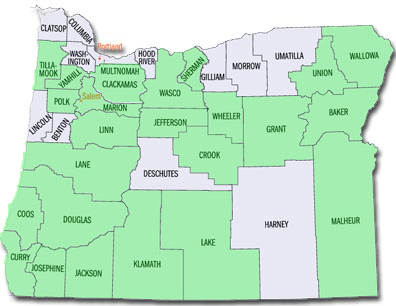 Who is Editorial Board of the Mail Tribune, the political decision-making body and how is it balanced?

Looked and looked to find out who the mysterious “Mail Tribune Editorial Board”is.  Didn’t find it, so I reached out a couple places and found that the Mail Tribune Editorial Board is comprised of three individuals.  On further discussion I found that all three are well vested in politics and two sources told me in the same party.  It would seem that the Mail Tribune swings a political sledgehammer.  Is that really the job of the press?  Once an article is in newsprint, there is no editing or recalling fictitious statements or inaccuracies.  Sure, maybe a retraction or edit online.  This is not an accusation, but do take care in using the advertising paid media uses to formulate your vote.  There may be other motivations at play as we have seen nationwide.  In my work as Bill Froehlich’s campaign manager, I released a video of my motivations and transparency about my relationship to the campaign and Bill’s relationship to Scanner Group.  Although I am a volunteer and not a paid editor, I felt that was respectful to Scanner Group Members.  I’m openly and notably conservative, but do not belong to a political party, have not made donations to a political party or worked for one, and have voted for other candidates than republicans in the past and will again this year as Mayor of Talent.  Heck, I even put my business logo at the bottom of Bill’s campaign site.  The Mail Tribute Elections board should do the same for their readers and community.  Over the years I have heard grumblings.  SET IT STRAIGHT FOR US.  PROVIDE DISCLOSURE OF YOUR POLITICAL ACTIVITIES & 2nd Amendment Stance Mail Tribune.  Maybe the readers could ask?

How accurate is their portrayal of candidates they don’t endorse?

I think this article should be enough information to QUESTIONthe accuracy of the Mail Tribune’s portrayal of ANY CANDIDATE.  Without knowing motivations, it is hard to vet the reason for all of the inaccuracies.

Is the Mail Tribune expounding journalistic integrity in their history of endorsing candidates or attempting to control public opinion from their communications platforms?

That’s the big question.  SHOULDthe Citizens base their opinion on that of THREE PEOPLEmanaging a media business with a bleeding circulation of 17,138 on weekdays and 20,505 on Sundays?  There are 215,000 residents in Jackson County.  There are 78,000 residents in Medford for perspective.  Could the editorial direction in recent years be a sign of the desperation to be needed in an industry that has shown declining readership for 20 years.  If you are looking for change, you may not find it in a Mail Tribune or Daily Tidings Editorial.  I recommend you examine the issues a bit yourself and not let the media steer your vote, but count on them to report more detailed information. 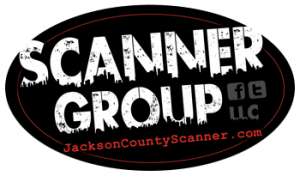 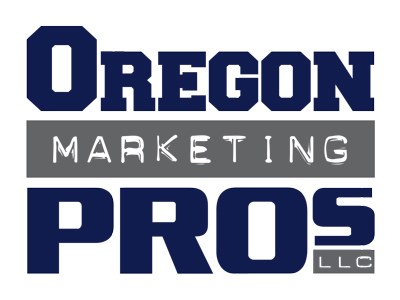